Although some may argue it's never gone away ... Bring Back Glam is worth a look for some long-forgotten gems.
Posted by DGW at 13:02 No comments:

Never been one for the twiddly-widdly antics of Steve Vai myself, but if that's your bag then maybe you need Guitar Christmas

Some Time In New York City

Despite not having heard of John Lennon at the time, I have some very clear memories from December 9th 1980 as the news of his death the night before came through from New York. I was 10 at the time and the only member of the Beatles I knew of was Paul McCartney – perhaps not surprising given that in the preceding years he had been the only Beatle in the public eye, not least with 1977’s ‘Mull Of Kintyre’, with Lennon having only just emerged from his self-imposed five year hiatus and the solo careers of George Harrison and Ringo Starr peaking back in the early 70s (the latter had yet to take the narrator’s role on Thomas The Tank Engine, otherwise I may have known who he was).

The impact on me cannot be understated, as a whole new world seemed to open up before me. Music was not that prevalent in our household; my mum had a small collection of singles from her youth, mainly Elvis, and although my dad did splash out on what turned out to be a very temperamental Bang and Olufsen system around 1978, replacing a little-used sideboard-style radiogram, I think this was more a status-driven purchase than anything else.

That evening the BBC broadcasted the 1965 film ‘Help!

’ and something was almost immediately triggered throughout our home. My dad bought Double Fantasy

and my older brother invested in the Red and Blue albums. It was shortly after this that I also started to buy records, pocket money permitting (my earliest purchases incidentally were ELO's Greatest Hits

debut album). Music for me became an obsession and rather than waste my teenage money on cigarettes I spent more and more on records. In 1985 I bought my first guitar and by 1988 I had a vague idea of how how to play it. I stumbled onto a stage for the first time the following year.

This can all be traced back to that day thirty years ago - my musical epiphany if you must. Hardly a replacement for the world when compared to the loss of someone of Lennon's status, but hugely important to me on a personal level.

It's merely taken the temporary form of a washing up brush

while taking stock of its situation.

As many of you will know, Share Ross was the bassist in Vixen. More recently she formed Bubble with a certain Bam on drums, which led now only to her taking the role of bassist in the Dogs D'Amour circa 2004 but also for the two of them to marry.

(Bam took the photos; and for reference one of the models is Jo 'Dog' Almeida). Given the current cold weather this book is as much a practical gift as anything else!


Punk Knits website
Posted by DGW at 10:24 No comments:

Suggestions on Facebook are that this is a shameful rip-off of Annick Giroux's Hellbent For Cooking ... certainly the basic notion appears similar, but if you want the recipe for Motley Crue's Pepper Jack Steak or Zakk Wylde's spaghetti and meatballs, this is the place to go. 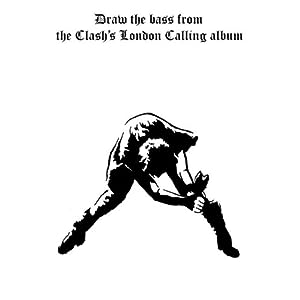 What more fun could a punk rocker have on Christmas Day than helping Siouxise Sioux with her make-up, designing tattoos for Henry Rollins before rounding off the evening by daubing grafitti on the walls of the toilets at CBGBs? After all, under the watchful gaze of all those aunties and uncles it will be difficult to get any serious glue-sniffing in ...

a lot over the coming weeks.

I'll also attempt to sneak A Twisted Christmas onto the 'death deck' (phrase © Kerrang any time between 1987 and 1992, possibly beyond). Very much recorded with their tongues in their cheeks, Twisted Sister came up trumps with this album and highlights include Oh Come All Ye Faithful, not least due to its opening being so reminiscent of the classic 'We're Not Going To Take It'.

Gift idea #2: Brats On The Beat (Ramones For Kids)

I first wrote about this album back in March, and cannot recommend it enough.

So if you're a parent trying to get away from the usual selection of children's music this is a great, and far, far more bearable, option. And as it's a fundraiser for the St Jude Children's Research Hospital you'll be making a seasonal donation to them too.

So it's that time of year where we all frantically search for that special gift that you hope no-one else will think of ... and for any self-respecting rock fan surely a tailored cookbook such as Hellbent for Cooking

Recipes have been suggested by well-travelled members of the likes of Thin Lizzy, Anthrax, Sepultura and  Gwar and include Beer Crust Pizza and Mushroom Steak a la Jack Daniel's. Could make an alternative offering to roast turkey and brussel sprouts ...