Lords of the New Church - Live For Today 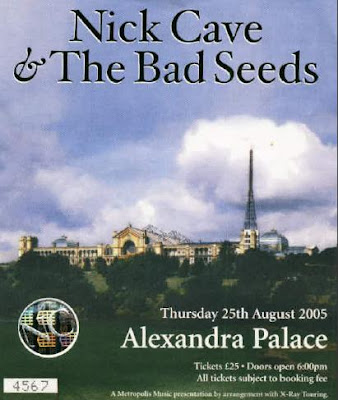 Now check out that ticket - how many of those do you see these days? Since the likes of See Tickets and Ticketmaster cornered the UK market I've found myself in the possession of various scraps of paper that all look much the same.

So for Mr Cave & co to produce a ticket adorned with a photo of the Alexandra Palace and it's stunning surroundings is noteworthy in itself. A true beacon above and between the terraced streets of North London, Alexandra Palace is a fantastic location - but a poor music venue. With a low stage and non-sloping floor, even the tall people in the audience were craning their necks to see anything.

A massive shame, and one that detracted enough from the evening for us to end up leaving early. Not a reflection on the gig itself - Nick Cave has enough presence to transcend the fact that you can barely see him. But also nagging away at me was the knowledge that I had tickets to see the Pixies at the same venue the following week .....
Posted by DGW at 18:00 1 comment:

Glamrock? Well, okay maybe not - but then google the name and you'll see he has a pretty fancy hair-do. And as becomes fairly apparent from his set he is very much a frustrated (failed) rock star.

I saw him back in 2005 largely by chance. With a trip to Edinburgh booked for the festival period and countless shows to consider, I heard on 5Live a small piece about the festival during which Tim Minchin was named as the 'must-see' show. So we booked - after all, the element of surprise is partly what Edinburgh Fringe is all about.

The idea of a piano-based songwriting comedian does not hold much hope - the last example I remember of this was Richard Stilgoe (or 'Richard Still-Going', as referenced by Newman & Baddiel). Not the sort of act you want to follow. But .... Tim Minchin has reclaimed the possibility that you can perform comedy this way and pull it off. In isolation his act suffers a little (I've seen him on TV performing individual songs), but his full show, with the songs punctuated by regular stand-up, delivered in a slightly nervous style, works brilliantly.

'Rock & Roll Nerd', in which he describes how he chose piano over guitar but desperately wanted to be a rock star has virtually become his anthem. He's touring the UK from next week before heading back to Oz for Christmas and to get you in the mood a few excerpts from his show can be downloaded from his website.

Interview with Ozzie from Gunfire Dance

Just picked up this interview from Sugarbuzz. To be honest it's not the most insightful of interviews but Gunfire Dance features are so few and far between that anything is noteworthy!

From a quick trawl of the Sugarbuzz site I've also found a piece on old friends and ex-bandmates of mine , the 2 Sick Monkeys. Go on, have a read ....
Posted by DGW at 13:01 No comments:

This was a quote taken from a review in the Guardian of a Teenage Fanclub single some years ago. And a fair point it was too - Teenage Fanclub have a fantastic ability to consistently churn out very good, yet rarely outstanding, records. As such you will rarely see them in any 'best albums of all-time' lists (unless someone's undertaken a 'Best Albums Of All-Time That Sound Rather Like Big Star' poll).

But generally speaking, many albums regarded as 'classic' are hugely flawed and probably don't deserve much more than a 7/10 rating if you break them down and rate them on a track-by-track basis. Take Appetite For Destruction - much of side two (for younger viewers this means the second half of the album) is filler. All the genuinely good - in fact great - songs make their appearances early on (I was never a fan of 'Sweet Child O' Mine').

Likewise the debut album from the other Roses of that era - the Stone Roses. Reissued this week

(or rather re-re-re-reissued as their former label, Silvertone, continue to draw as much as they can from this particular well), the Mancs can claim three bona fide classics in 'I Wanna Be Adored', 'I Am The Resurrection' and 'Made Of Stone'. One backwards song and a direct take on 'Scarborough Fair' surely prevent the album from being considered a 10/10, while the remaining tracks all score somewhere in the mid-range. Overall, it's probably another 7/10 - but try telling that to anyone who went to Spike Island and in 2003 the NME declared it the best album of all-time.

There is an ongoing internet poll over on Best Ever Albums. The ever-so predictable top 10 is currently as follows:

Now, I have over the years bought every single one of those albums, although many of them were on vinyl - or in some cases even cassette - and have since been sold on or lost and I currently possess only 5 (numbers 5, 6, 7, 9 and 10).

Out of the top 10 I'd probably pick out Dark Side Of The Moon and Nevermind as being the most solid and near-flawless - although I haven't heard the former for the best part of 20 years and am in no rush to play the latter anytime soon either. The album I'm most likely to play out of the 10 is the one bringing up the rear - Velvet Underground & Nico.

Realistically though I'm far more likely to pick out The Umajets, Jason Falkner, Teenage Fanclub or their predecessors, Big Star. Solid 7/10 artists all the way. But would they make into my personal top 10? Unlikely.

For the record The Stone Roses is at number 22 and Appetite For Destruction is at 41. Teenage Fanclub's Grand Prix is at 1,586 and their breakthrough album, Bandwagonesque, is down at 1,881.

From Iron Maiden to the Only Ones in just 21 years ...

I still have in my possession tickets for pretty much every major gig I've been to. A few are signed (Tigertailz at the Astoria; Enuff Znuff at the Bristol Bierkeller; Bobby Conn at the Garage) - I do have a tendency to talk to anyone and everyone at gigs, particularly towards the end of the night (can't think why ...).

I seem to have lost a few from the mid-90s (although to be fair I don't think I went to many), and there are numerous gaps where venues didn't issue tickets. So I only have one Redd Kross ticket - for the Marquee - but I can think of at least four other occasions that I went to see them - twice at the Powerhouse, once at the Subterannea (both long-closed London venues) and once at the Fleece & Firkin in Bristol.

Going back through these tickets leads to the inevitable thoughts of 'which was the best gig?'. And as ever there's no easy answer.

Iron Maiden at Oxford Apollo (1986) has potential, but then it was the first proper gig I went to and so immediately scores high. The New York Dolls at the Royal Festival Hall, (2004) Hanoi Rocks at Camden Palace (2002) and the Only Ones at Shepherd's Bush Empire (2007) all benefit from being gigs by bands that I never thought would happen (and some would argue given the line-ups involved technically never did).

Oddly Black Grape at Cardiff University in 1995 is another I have fond memories of - the audience and the band seemed to feed off each other in a way I'd not witnessed before (there could have been a lot of Ecstasy involved though - not on my part I hasten to add). The way Ryder, Bez and co dealt with their power being tripped due to general overheating within the venue - and the need to call in the Fire Brigade before switching it back on -merely added to the night.

So I'll be going back through these gigs over the coming months - I need something to ensure I focus a bit more on this blog! Two months without a proper post really isn't good enough ....
Posted by DGW at 12:57 2 comments: