In a game of book tag, I've been led to Neighbourhood Threat: On Tour With Iggy Pop

via Andy McCoy's autobiography. Based on the world tour that featured the two in Iggy's band, McCoy refers to Gibbs's book as being 75% about him (i.e. McCoy). And he's not far out although he was helped by Iggy taking on this tour in a comparatively clean state, giving Hanoi's guitarist a free run in the excess department.
Alvin Gibbs does a good job of capturing the highs and lows on the road, and even when he needs to resort to detailing the more monotous stretches he doesn't manage to make the reader feel as bored as he clearly was. Recommended reading.

I can hardly bring myself to type this but ... Mick Hucknall to front a reformed Faces???

When Hanoi Rocks reformed most of my friends didn't have any issue with the absence of Sami & Nasty. Although Andy & Mike were physically only 40% of the band it was taken as read that their importance within it was at least double that.

Their attitude was quite different when the New York Dolls returned for the Meltdown Festival, even though they did at least pitch up with all the surviving members. I think it was the absence of Johnny Thunders that bugged most; early rumours that Izzy Stradlin was taking his place weren't even sufficient to encourage many people I know to pick up tickets. The subsequent passing of Arthur Kane had definitely led to some retrospective regret.

But The Faces without Rod Stewart? And not only that, but with the singer from Simply Red taking his place? I dare say that in musician circles he's a highly rated vocalist but I can't see too many die-hards showing up for this.
Posted by DGW at 16:23 2 comments: 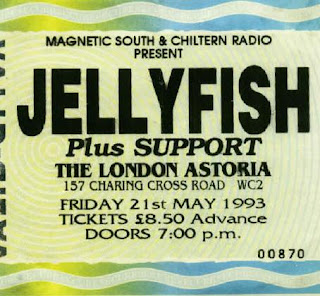 Seventeen years ago today, and one of many, many nights spent at this great, lost venue. As well as numerous club nights I can remember seeing a triple bill of Soho Roses, The Last of the Teenage Idols and Tigertailz here, and a fairly early show by The Manic Street Preachers (Feb 1992). RIP The Astoria.
Posted by DGW at 09:23 2 comments:

For UK readers, Stones in Exile is on BBC this Sunday (May 22nd) at 22.25. I'm not sure whether this is the same film that was screened at the Cannes Film Festival to much fanfare earlier in the week; seems odd that the BBC would be showing it so soon after rather than it taking on a limited cinema release.

Commemorating the 30th anniversary of Exile on Main Street

(along with a deluxe CD reissue with extra tracks), the film tells the story of the band's decision to flee the crippling UK tax system (then set at 93% for the super-rich) to set up camp in the Cote d'Azur. Inbetween some excessive partying the Stones managed to record what's regarded by many as their definitive album. Could make for interesting viewing assuming the director has managed to extract some very candid contributions ...

is available on DVD; clocking in at double the length of the BBC broadcast it's either an entirely different film or a heavily edited one they're broadcasting.

I've touched before on the fact that pre-Appetite For Destruction I was heading down more of a thrash metal road. Hell, I even bought Onslaught's dreadful version of Let There Be Rock

(that may have been the last straw). I also had a letter printed in a Kerrang! thrash special in response to the question 'Have Metallica sold out?' - I took the 'no' option, instead detailing how as a band they had simply progressed in the years since Kill 'Em All

. My move towards glam had already begun though, and the letter was signed off using a combination of a soon-to-be-discarded stage name and my not-yet fully formed band: Glyn 'The Rockit Doll' Alexander.
It was during this inbetween stage that 22 years ago today I was on the front row of the balcony at the "The Hammy O" (not the Labatts Apollo or any of the other appalling names bestowed upon this venue) taking in Megadeth. I was never a fan of support act Sanctuary, and even though the vast majority of their set remains unmemorable I do have strong recollections of their version of White Rabbit

. The main ones being a) it was very, very loud and b) this volume combined with the singer's piercing voice in such a way I'm surprised my hearing's intact.
Megadeth were approaching their career high on this tour, having followed up the stunning in places Peace Sells... But Who's Buying

with the more coherent So Far So Good So What

. On coming to scribble this I've had the urge to listen to the latter for the first time in 20 years, and will nipping over to Spotify shortly. Having always remained in Metallica's shadow, the effect of which can be seen in Some Kind Of Monster,

it perhaps seems fair to give Mustaine's 'rebound' band another chance, as unlike the one that discarded him, Megadeth have at least had the decency to produce more than a handful of albums over the years (though I've heard nothing since Rust in Peace

Plans are afoot for a Nikki Sudden movie, Suddenly Dead. Clip available on You Tube. Also over on Facebook, a nice quote from Mark Lemon on his early recollections from his Jacobites days.