Damn, should have posted this last week, for it was 20 years 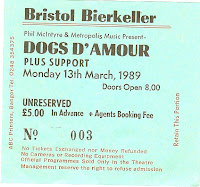 (and a few days) ago that I first saw the Dogs D'Amour down at regular stamping ground the Bristol Bierkeller.

was released. In real terms this was when the band were at their peak, just before they took to releasing hastily-assembled albums every other week (or so it seemed) and with the classic line-up firmly in place, before Ginger or Andy McCoy whisked anyone away.

It was around this time that I took to frequently calling the Dogs D'Amour's management - after all, they'd put their contact number on their record sleeves - usually testing the water to see if they used local bands for supports. And very polite and friendly they were too as they rejected my overtures. In recent years I've found that another friend - that I hadn't met back in '89 - used to do the same thing.

Move forward to 1998 and quite by chance I finally got the gig - supporting Tyla at an acoustic show at the Water Rats in Kings Cross. Thing is, I wasn't looking forward to it having seen him two years earlier Upstairs At The Garage - a dreadful gig, where he was simply going through the motions while flagged by two bouncers (their presence may have been for more sinister reasons), barely acknowledging the audience and ignoring any requests for the 'hits'. The intervening years had obviously been kind to him though - he gladly played whatever anyone wanted to hear, cracked jokes inbetween songs and ensured we all went home happy.

A few weeks later we supported Spike at the same venue - where were these gigs when I needed them ten years earlier?!!
Posted by DGW at 08:02 1 comment:

A release date has been set for Cause I Sez So

, the forthcoming New York Dolls album - May 4th in the UK, the following day in the US.

As well as re-uniting with Todd Rundgren the band have re-recorded 'Trash'.

This blog has been a good excuse to go through my collection and see what's been gathering dust. The Royal Court of China were mentioned in the thread on the Swindon music forum that emerged from this blog and so I found myself in the loft rummaging through boxes of tapes to see if I still had anything by them.

album up to the counter in the record shop I worked in and asked to listen to it 'on the cans'. I dismissed the guy as thinking he was much cooler than he really was, that he should immediately stop using words like 'cans' and that he had no idea what this band was about.

He proceeded to buy it, making comparisons to Georgia Satellites. My opinion shifted slightly and he started to become more credible. He then said he wanted to buy the Simpsons album and those gains were lost. Until ... 'Because my old mate Davey Jo's on it' he said. Eh? Surely he doesn't mean? And he did. And the worst thing is I can't for the life of me remember how/why he knew David Johansen (who under his Buster Poindexter alter-ego duets with Bart on Chuck Berry's School Days).

I haven't got round to playing the tape yet (limited access to a tape deck doesn't help), but if a friend of David Johansen rates it and says it sounds like the Georgia Satellites then what more do you need to know?

One of the best post-Hanoi releases (or now I guess 'in-between Hanoi' releases) and easily the most distinct from Hanoi Rocks itself, Silver Missiles & Nightingales

is the excellent 1986 collaboration between Nasty Suicide and Andy McCoy. Recorded around the same time that the pair were in the Cherry Bombz (some material was used in both bands)

I remember reading somewhere (I think it was on Glitzinet) a suggestion that this album was directly influenced by the Jacobites; to my mind the Gary Holton & Casino Steel albums are a more likely source of inspiration (but then acoustic albums by traditionally electric-based artists are hardly that rare - I mean, couldn't it be argued that all or any of McCoy, Suicide, Holton, Steel, Sudden and Kusworth were indirectly responsible for the MTV Unplugged format?).

The joyous Sweet Pretending is perhaps the album's highlight, but there are stunning moments to found in quieter numbers such as Heaven Made You and The Best Is Yet To Come. Far superior to Jerusalem Slim or Shooting Gallery (and for once Devil Callin' wasn't dragged into the studio kicking and screaming, although it's possible it hadn't been written yet).

I'm not sure why this album is now so expensive online - even on Ebay it's selling for double figures, less than two years since I spent approximately £2 there on a brand new, sealed CD replacement for my well-worn vinyl copy. Yet another one for the reissue list ...

Your must have, ultra-essential glam release ...

Nice little thread over on Glitzinet - name "the album, whatever, that you feel is an essential MUST HAVE of the genre ... that one release that we all feel is the "must have", the CD that when you go into somebodies house who claims to be into the style, if they don't have it, you almost faint."

"Easy" you might say .... but then think again. As there had already been a few answers I had a brief inclination to say something different. I toyed with Appetite For Destruction, as that was the album that kick-started things for me and moved me away from Metallica and Anthrax, but as good as it is it's not THE album. Too many flaws, particularly much of side two.

Soho Roses nearly got a look in for 'The Third And Final Insult', the album that my band at the time attempted to imitate (and almost got there in that we apparently sounded like the Buzzcocks). Then there's the Hollywood Brats - I can still remember my excitement when I first got that LP home and on my turntable.

But in the end it came down to the debut album by The New York Dolls. It wins almost by virtue of the opening chord and cymbal crash on Personality Crisis

Voice your comments and nominations here.

I was pleased to pick up a CD of Lust For Life in a charity shop today - another case of an old LP sitting in my collection, gathering dust, hoping that one day I'll have a turntable again, so it's great to have it back in my life.

Still not sure what I think about that Swiftcover ad though - particularly as they won't insure musicians!

In the early 80s Gary Holton & Casino Steel made four albums together. On some sites this is reported as three - I have it on good authority that even Casino Steel himself doesn't own a copy of the fourth one and so can only assume its rarity has confused many. However it does exist and commands high prices on Ebay (meaning that I don't own a copy).

) in the Camden Record & Tape Exchange.

Comprising of covers of country and western songs (Ruby)

; The Beatles' No Reply) as well revisiting their own back catalogues (versions of The Boys' B-17 and the Heavy Metal Kids' She's No Angel

) these albums are well worth digging out by anyone with a passing interest in either of the artists involved or the quirkier side of trash rock & roll.

The Hanoi link goes a little deeper, with Michael Monroe of course covering She's No Angel on both of his first two solo outings, as well as Jimmy Brown

. I also can't help but feel that the Suicide Twins' Silver Missiles & Nightingales

wouldn't have existed without this series of albums.