Split roughly 50/50 between trashy rock & roll featuring the best riffs that Johnny Thunders failed to use, and what could almost be out-takes from Big Star's Third

album, this was Primal Scream's first attempt at dorning low-slung Les Pauls, later explored in greater depth (and with longer guitar straps) on the more Stones-esque Give Out But Don't Give Up

Gillespie's voice occasionally lets him down, a feature that has affected much of Primal Scream's output. Oddly on perhaps the album's most challenging track, I'm Losing More Than I'll Ever Have, he more than holds his own. It is this track that gave the band their breakthrough when remixed and released as 'Loaded' (the title surely taken from the Velvet Underground

album of the same name, as the track's main refrain is very similar to Oh! Sweet Nuthin').

The first of an occasional series, and where better to start than that classic music chat staple - 'my first gig'.

Naturally I'd like to claim that it was something prodigious. Hanoi Rocks did make it to within a few miles of my hometown, but in June 1983 I was 12 and completely unaware of their existence.

I did, though, see a gig at my local youth club circa 1984 that featured a band called Glamour Eyes who, I was told many years later, covered 'Don't You Ever Leave Me' (again, I wouldn't have known the song at the time). The guitarist in Glamour Eyes, one Richard Davies, later achieved a certain degree of fame in Tiny Monroe and was even touted as a possible replacement when Bernard Butler left Suede.

Local gigs aside though the privilege falls to the mighty Iron Maiden, out on the road to promote Somewhere in Time in 1986. Support act Paul Samson's Empire therefore became the first 'proper' band I saw live, and to be honest I can remember precisely nothing about them - we weren't there for them and as proficient as I'm sure they were, they simply weren't Maiden. 2,000 people effectively saying "Move on, there's nothing to see here" - a scene repeated down the years at pretty much every gig I've been to.

), Maiden are a band that treat every show as though they're playing in a stadium and so I didn't feel short-changed even though one prop (a robotic alien Eddie) had to be pulled as the Apollo couldn't accomodate it. And 'scream for me Oxford' doesn't have quite the same ring as the famous 'scream for me Long Beach'. As far as first gigs go though there was a very real chance that it could only be downhill from then on .... 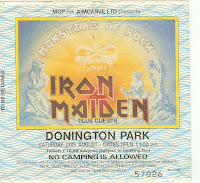 Donington Park. A lot had changed in that time, and with Appetite For Destruction having been released the year before - and Guns N' Roses taking a lowly spot on the bill - we all trooped up in our glam finery (or rather our very bad interpretation of it). Along with my friend Mark we made it very clear that we had no interest in watching Iron Maiden .... until approximately five seconds after they took the stage, sufficient time for Bruce and the boys to make it clear just how bloody good they were and we found ourselves desperately clawing through the crowd to get as close to the stage as possible. A reminder to one and all that you should never restrict yourself to one form, genre or sub-genre of music. If it's good, it's good.
Posted by DGW at 08:47 1 comment:

Good lord. I forgot I had this lurking on my PC.

It's hardly Phil Spector - in fact it's pure Twisted Sister. 'O Come All Ye Faithful' is so close to 'We're Not Gonna Take It' it's frightening.

Happy Christmas one and all.

Under Neath What? - What Is It 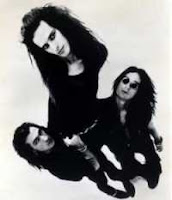 Under Neath What? were the slightly odd choice of support for the Dogs D'Amour in 1989, a tour I caught at the Hammersmith Odeon (this was before it became the 'Labbats Apollo' and all the other daft names - it's the Hammy O, let's just leave it at that). Less than 6 months earlier I'd seen the Dogs at the much smaller Bristol Bierkeller, and it looked as though they hadn't upgraded their equipment in that time as their small, 50w amps were simply on chairs on the Odeon stage and miked up - not quite the wall of Marshalls that you might see lined-up behind The Cult.

Anyway, back to Under Neath What? and their only album, What Is It?

. Difficult to describe (and that's not me being lazy; even the band's posthumous My Space page sidesteps any attempt at naming influences or describing their own sound), I did like Dave's description on the thread that refuses to die: "the musical version of taking Ketamin...warped, heavy and oppressive".

Yet again Sleazegrinder comes through with another great piece (in fact I mention that site so often that I'm wondering whether I should make this blog a permanent link to it and forgot about writing anything of my own ...).

Barracudas - Drop Out With The Barracudas

Making it onto Glamrock Aftershock via drummer Nick Turner's later role in the Lords Of The New Church (and if you're reading this in Australia and enjoying the sunshine, this is a great summer listen btw), Drop Out With the Barracudas

is a fine album of two halves.

Side one leans towards a darker, brooding garage sound while side two (kicking off with the top 40 hit 'Summer Fun') sees the Barracudas 1980 take on the Beach Boys, but within a year of its release the rhythm section moved on (according to a piece on Noise For Heroes bassist David Buckley was pushed while Turner jumped ship). The subsequent Barracudas that emerged concentrated more on the garage sound (The Garbage Dump Tapes are also well worth a spin).

So if the ubiquitous Christmas music is getting to you, check out the Ba-ba-ra-ra-cu-cu-da-das - they'll soon put a smile back on your face.

If only a fraction of what I've read about the Joneses is an accurate reflection of the band then I should love them:

'A hot-blooded mix of the New York Dolls, Johnny Thunders, and Eddie Cochran, too glam for punk and too punk for rock. If the term “trashy rock ‘n’ roll” could only apply to one band, The Joneses would take the label in spades' (Full Breach records)

- but having listened to a few online samples I've not been grabbed. This may be down to the fact that I've only tried listening to them at work and haven't been able to crank it up - but as a fan of the New York Dolls, Soho Roses, Gunfire Dance, Stiv etc (i.e. not Warrant, Winger or Slaughter) should I persevere? Answers on a postcard please (or just via the comments box if you prefer ...).

Lumped in to the 'grebo' scene of the late 80s (along with Gaye Bykers on Acid and PWEI), Crazyhead had deeper roots than the tag might have suggested and - like Gunfire Dance - had a penchant for obscure 60s garage music. Quickly signed to Food records, the band found themselves on some good tours (The Cult, Iggy Pop) and made headway in the Indie charts with singles such as the fantastically titled 'What Gives You The Idea That You're So Amazing Baby?'.
It seems that Food records being bought out by EMI (ostensibly to get hold of label mates Jesus Jones) was the beginning of the end for Crazyhead, and two minor hit singles from the album weren't enough to stop them being dropped.

is another one for the growing list of long-deleted (but highly sought-after)albums. However, the band are planning to tour next year and so maybe that could change. If anyone out there has a record label and wants to pick it up (along with Uncle Sam's Letters From London, the Four Horsemen's Nobody Said It Was Easy

and the Beasts of Bourbon's back catalogue) then you'll find some grateful purchasers out there ....

First off, big thanks to the Swindon Music forum spin-off thread (5 weeks, 2,145 views and 172 posts down the line and still going strong) for reuniting me with this album. 99p well spent ....

I did have the LP (with rubber sleeve) from its first release, when someone told me that they were a mix of Guns 'n Roses and the Rolling Stones. I'm thinking they'd either never heard Nothing's Shocking

, or had read a very strange review.

One thing you have to say for Perry Farrell - he has the decency to be a rock star. At Reading a few years ago we toiled through the likes of the Dandy Warhols and the White Stripes, bands I do like but they just looked like blokes (with a couple of girls thrown in). However, the second Jane's Addiction came on it was clear that you were dealing with something else altogether. The get-up (a flamboyant white suit, with matching feather-topped hat), the presence and, of course, that voice.

When looking online for a picture of Jo Almeida for my previous post, I was surprised to find that he is a model in a knitting book called Punk Knits

Imagine my further surprise in discovering that the two people behind the book are Share (ex-Vixen) and partner and former Dogs D'Amour/Wildhearts drummer Bam Bam!

Bam's very proud of his hobby :

Whatever turns you on I suppose .... 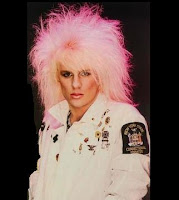 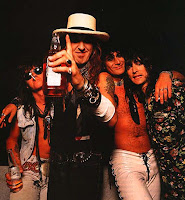 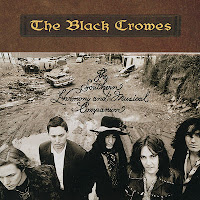 
To follow:
Lookalikes part two: when the crimping stopped
Posted by DGW at 13:14 2 comments: