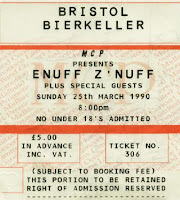 On coming to write about this show it dawned on me that my attendance played a significant role in shaping my future that I'd always attributed to a later gig at the same venue (The Lovejetz on October 14th, 1990).

For it was at the Lovejetz gig that the initial connection was made between my group of friends and my now-wife's (we didn't actually meet that night, and it was another two years before we first got together).

However, if I hadn't gone along to see Enuff Z'Nuff six months previously I wouldn't have met the person who told me about the Lovejetz gig and it's unlikely that I would have gone along otherwise. 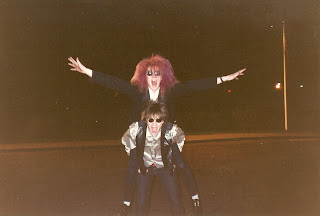 At it was I only went along to show off my freshly dyed purple hair (as per photo, taken at a service station that very evening). 'New Thing' used to drive me mad with its whining vocal melody and I'd never managed to get beyond that. In subsequent years I've been told several times that I might like Enuff Z'Nuff's later albums (I was surprised so many existed), with comparisons to the likes of Jellyfish being mooted. In light of the realisation that they played such a key part in my life I've recently spent a little time over on Spotify going through their back catalogue (hell, I even have a playlist on the go - hardly comprehensive I admit. And I'm still not keen on 'New Thing' btw). 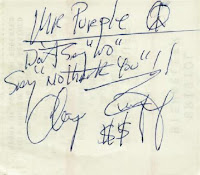 Twenty years ago though I spent the evening playing pool. I did however come away with Chip Z'Nuff's autograph (to 'Mr Purple' no less). I probably should have paid a lot more attention to the band but hey, my hair did look great ....
Posted by DGW at 13:49 1 comment:

Slash at number one

is at number one on the pre-order chart over on Play.com. Proof it seems that innovative ways to present a new album can bring success - after all, would this album have seen so much interest if its initial release had been in regular CD format only? Certainly I wouldn't have been aware of its imminent arrival.

Brats On The Beat - Ramones For Kids 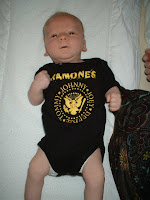 About 18 months ago I mentioned my son's liking for the Ramones. To be fair this was virtually pre-determined as can be seen from this photo, taken at the ripe old age of 1 month and 1 day. A meaner looking punk rocker you're unlikely to meet.

We actually stopped playing them for a while, but a couple of months ago the Ramones again became a staple choice and our son is regularly overheard singing snippets such 'Hey Ho Let's Go'  (natch), 'I remember you, ooh-ooh-ooh-ooh', and our current favourite, '53rd and Bird' (for those of you without children, there's a kids TV programme called 3rd And Bird

A little late in the day given that he's so immersed in the real thing, but we've just picked up Brats on the Beat: Ramones for Kids

. With contributions from members of Pennywise, the Dwarves, Alkaline Trio amongst others, it's a step up from the Rockabye Baby CDs (as good as they are) and is a fundraiser for the St Jude Children's Research Hospital to boot.

Email ThisBlogThis!Share to TwitterShare to FacebookShare to Pinterest
Labels: Ramones

Pink Floyd are famous for rarely releasing singles, particularly during their 1970s peak - a tactic that arguably paid dividends with Dark Side of the Moon

seeing sales estimated as high as 45 million, placing it as the third highest selling album of all-time (The Wall, from which the single 'Another Brick In The Wall' was culled is estimated as selling 30 million copies, Wish You Were Here 20 million, Animals 12 million, and The Division Bell 11 million). It seems that their contract included a very important clause stating that their albums should not be split up without their consent.

By the mid-90s record companies were in the habit of deleting singles quickly so as to drive up sales of their counterpart album. I remember when the dreadful 'Search For A Hero' by M-People was picked up for a TV ad, seeing a huge demand for the single to be re-released. All we could do at Our Price was offer customers the 'Bizarre Fruit' album instead - only for the record label to pull that as well, and re-issue it as a more expensive double CD with extra tracks. Other artists that benefitted from this type of marketing tended to be one-hit wonders such as Tasmin Archer ('Sleeping Satellite') and Meredith Brooks ('Bitch').

In a world of MP3s this could never happen (indeed, should you wish to download M-People's monstrosity on its own you can do so here

). In some ways it's odd that EMI fought this case, and would instead be content to force consumers to spend the extra cash. Maybe given their current travails they're simply desperate for quick income.
Posted by DGW at 13:38 No comments:

D'you know where you are? 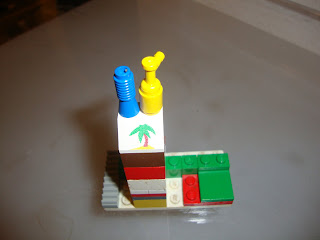 Just before bedtime tonight my almost 4 year old son was playing with his lego.

He picked up a piece with a palm tree on it and said:

'This is a sign that says Welcome To The Jungle.'

I asked where he'd learnt this. He told me he'd made it up. I'm sure I'd never said it to him and so figured his mother must have done, but she's as surprised as me. 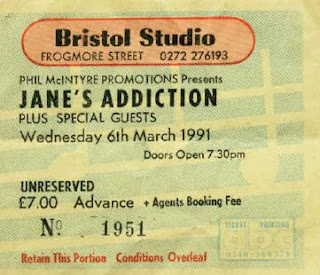 I've gone back through my ticket archives for the first time in a while and on this day 19 years ago I paid the princely sum of £7 to see Perry and the boys at the now-defunct (or possibly re-named*) Bristol Studio.

In addition I believe Primus were the support band but I have no recollection of them whatsoever!

My one memory of this show was that Jane's Addiction were disappointingly slick. Given their legendary status I expected a night of glorious, disjointed chaos. This is made all the more surprising knowing now how close the band were to splitting up at this point. Perhaps they were simply too busy not speaking to one another to properly rock out.

Further info can be found regarding this show (in fact, there's a full list of every show Jane's Addiction are believed to have played), including posters, itinerary and more, at the stunningly detailed janesaddiction.org.

Rock on with BBC4 tonight - NWOBHM

From 9pm - very much a NWOBHM feast.

Iron Maiden's Flight 666 is also available on iPlayer until March 12th.
Posted by DGW at 09:28 No comments:

"The one here's pretty good though isn't he?"

For a producer, Ric Browde isn't a bad novellist. The uncredited statement on his book's cover that it's for 'everyone who wished JD Salinger had had a sense of humour' is over-egging him somewhat though (and is also misleading, the 'had had' seemingly suggesting Salinger was already dead when the edition I have was published in 2000).

Described as 'totally autobiographical except for all the bits where I lied', While I'm Dead...Feed the Dog

centres around Ric Thibault, smalltown Missouri teenager who finds his mother has taken an overdose and left numerous suicide notes, including one that requests her family adhere to one request that provides the book's title. The note left for Ric reveals his mother's awareness that he's been sleeping with their neighbour (both his mother's best friend and his best friend's mother), prompting a swift recap on recent events that see Ric move from 'twentieth century Vestral Virgin' to local sexual hero, via a couple of David Bowie groupies (an in an oral flash Bowie himself goes from an artist Ric 'can't stand' to his 'favourite rock & roll star of all-time').

With new found confidence Ric finally approaches the much desired Nina Pennington for a date - somewhat exagerating his closeness to the Thin White Duke - and the spiral of lies that prop up the book begins. Gradually Browde introduces a mafia connection, who present Ric with a Corvette courtesy car following an accident involving some nuns (indeed, it's courtesy of the Church), an inept local Police force at war with the media, a struggling up-and-not-coming band that see Ric as their ticket to fame and fortune, various liaisons (often in the Corvette, as predicted by mafiosa Salvatore Veneruzzo) and after a while there is so much going on - oh, several dead Latin teachers as well - that Browde does struggle slightly to being everything back together again.

Definitely a rock & roll curio, and I'm almost prepared to forgive him for encouraging the Dogs D'Amour to re-record 'Heroine' on Straight

, a version only rendered less pointless when the Wildhearts got hold of the song on Endless Nameless