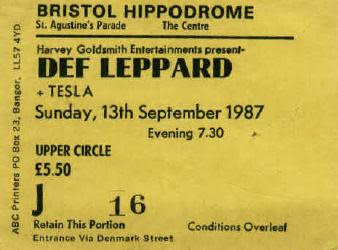 Perhaps not the coolest gig to write about, but then again seeing a band of Def Leppard's stature for £5.50 in a 2,000 capacity venue is something that's going to happen again anytime soon.

album. I remember thinking some of the guitar playing on it was phenomenal. This was however just before the release of a certain Appetite For Destruction and the impending shift in my musical tastes. I dare say I'd have a very different opinion now, but on the night Tesla didn't let me down and for me gave Def Leppard a mountain to climb.

This was the first UK leg of the Hysteria

tour and, more importantly, the first sighting of Rick Allen since his accident. They could have made this all schmaltzy, but bar a short interlude where Joe Elliot spoke about what happened (with Allen sat on the drum riser) the band simply got on with it. As the album continued to sell and countless singles were released, they returned to the UK six months later and I saw them again - by which time they'd upgraded to Wembley Arena. Poison were supposed to support but pulled out; this was sandwiched between Motley Crue cancelling their UK tour (the infamous 'snow on the roof' excuse) and Cinderella withdrawing from a planned support slot to Judas Priest. I actually avoided buying a ticket for the latter for fear of Cinderella cancelling - a few friends didn't think lightning would strike three times and were rewarded with Bonfire instead. Ho-hum.
Posted by DGW at 19:30 2 comments: 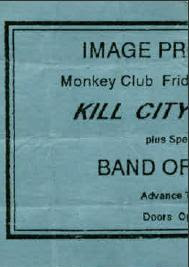 Due to the way my ticket was torn in half I can't put a definite date on this gig, but I'm certain it was August or September 1990. This was during a brief phase when Swindon's Monkey Club became part of the circuit that also included the infamous likes of Bedford Esquires, Dudley JBs and Birmingham Edwards No 8.

The Monkey Club had (or rather didn't have) one thing that the other venues didn't (or indeed, did).

Yep, the first line of defence between the band and its audience was the lead singer's microphone stand, a fact that was not lost on guitarist Steve von Saint who told me a couple of years later that they nearly pulled this gig when they arrived and saw that the facilities weren't quite what you'd expect from any self-respecting music venue. Bless him.

I'd seen the Kill City Dragons twice before - once in a double-header at the Marquee with the far-superior Gunfire Dance, and later at the Electric Ballroom, a gig I foolishly left early and in doing so missed a guest appearance from Andy McCoy. By the time this show came round the Dragons had released their variable 'Let 'Em Eat Cake' EP and were perhaps under a little more scrutiny than when they first formed. Opening with what was far and away their strongest song (Fastest Way Down), the Dragons quickly showed that they were lacking in depth. It's not that they were a bad band, it was just that they didn't add up to the sum of their notable parts and when McCoy came knocking and took half the band away for the ill-feted Shooting Gallery project it was no great loss. Definitely a case of style over substance, but with a couple of decent tunes thrown in, something many bands fail even to achieve.
Posted by DGW at 19:30 No comments:

It's ridiculous to think that I hadn't seen 2 Sick Monkeys before. Not just because I've known both members for over 20 years, or even because I've been in bands with both of them at different times.

No, the main reason this is so ridiculous is that this was their 498th gig.

Feel free to read that again. Their 498th gig.

Yes, heading towards their 500th live performance, 2 Sick Monkeys rolled into Cambridge (and ultimately onto my living room floor) to astound everyone as to how much noise a band can make with just vocals, bass and drums. Pete's on-stage banter has been the stuff of legend so it was great to finally witness it first-hand (he always had something to say when fronting Cut Throat Razor, but he's stepped this up a level).

Check them out over at My Space good people - and maybe you could even go along to their forthcoming 500th gig ....
Posted by DGW at 13:10 1 comment: