I'm not going to repeat myself (or rather re-repeat myself) about the lack of interest many of my friends had regarding the return of the New York Dolls.

Personally I couldn't get tickets quickly enough, and not just for the gig but for a showing two days beforehand of footage of the band taken by Bob Gruen and introduced by the man himself. There were backstage clips (the sight of band hairdresser Johnny Thunders having to jump up so that he could spray Arthur Kane's hair sticks in the memory), recordings taken from TV appearances (as this was pre-VCR this was captured by literally filming the TV as the shows aired) and arguably the highlight was the special trailer to the 'St Valentines Day Massacre' gig that showed the Dolls in full 1930s gangster regalia. Much of this footage has since been released as part of All Dolled Up.

That same night, though, the Dolls had agreed to play an extra show due to the demand for tickets. Now, one thing that was apparent during the screening was the lacksadaisacal approach to checking tickets. Both the venues involved are odd in that you don't need a ticket to get through the front entrance, only to get into the performance areas. So after the film finished we moved on to the Royal Festival Hall next door, took up residency in the bar and monitored the situation. Once suitably oiled it was apparent that a sneaky peek at the Dolls was on the cards, particularly when almost on cue the doorperson wandered off for a moment ...

The 45 minutes of the set we caught that night blew away the full show I saw two nights later. Being drunk and sneaking in probably helped the sense of occasion (plus the tickets I had for the Friday show turned out to be up in the gods, despite getting them in a supposedly special pre-sale), but mainly it just came down to the excitement of seeing the three remaining New York Dolls on stage - and putting in a performance so unexpected for a band that hadn't played for almost 30 years. The DVD

of the Friday night show captured them perfectly, even leaving in some of the errors (such as Steve Conte playing the opening riff to 'Jetboy' instead of 'Personality Crisis').

The passing of Arthur Kane a few weeks later was a huge shock; from seeing the excellent and emotive biopic New York Doll you can't help but think his only reason for staying alive was to get the band back together one last time. Thankfully he got that one last wish.

Following on from the Best Album of 2008 post, I can announce that the best gig I went to last year was Wreckless Eric at the Portland Arms in Cambridge.

However, this was the only gig I managed to go to last year; I'm already on course to double that in 2009 so the competition for this year's award will be much more fierce.

Update 24/02/09 - the Only Ones gig at the Cambridge Junction was cancelled and so assuming a) Morrissey doesn't cancel in May and b) I don't go to anything else this year then we can declare the 2009 winner now.
Posted by DGW at 13:43 No comments:

Hanoi Rocks - heard that riff before at all?

When I first came across Hanoi Rocks in the late 80s it was great to hear a 'glam' band that had drawn from a punk/new wave background rather than metal. (I know I've mentioned this quote before but it's like when Paul Blittz stated in an interview that he hated when bands described themselves as 'punk' but were in fact just bad metal.)

One or two points of reference were quite clear. For example the single note piano part on 'Dead By Xmas' was reminiscent of Captain Sensible's playing in the Damned. It also went without saying that Andy McCoy had listened reverentially to the Clash, and London Calling

in particular. 'Taxi Driver' is virtually 'Brand New Cadillac' (admittedly that was a cover) and the choppy guitars on the title track feature prominently on early Hanoi (eg '11th Street Kids').

As I moved on through other bands, though, more noticeable similarities emerged. Imitation is of course the best form of flattery, and recipients of such dedicated attention include the Dead Boys (the intro to '3rd Generation Nation' on We Have Come for Your Children

debut features a brief snatch of what I knew as part of the riff to 'Boulevard Of Broken Dreams' before moving onto a verse that Hanoi fans will recognise as 'Oriental Beat'.

Does any of this influence my opinion of Hanoi Rocks, or Andy McCoy as a songwriter? Not a bit. And I'm sure it would be easy to disect the output of many other bands in the same way. What would upset me though would be finding out that 'Tragedy' was lifted from an early Emerson, Lake & Palmer track ....
Posted by DGW at 08:52 1 comment:

Hurrah for the surprises that charity shops can throw up. I recently picked this up on CD after noticing it was produced by Jeff Dahl, and expecting it to be sound along the lines of, say, the Detroit Cobras.

I was wrong, and pleasantly so.

This is a much punkier, trashier album than I was anticipating; if it reminded me of anything it was very early Goo Goo Dolls, but considerably more lo-fi - Dahl's 'production' duties seemingly having consisted of little more than pressing 'record' and then 'stop' again approximately two minutes later.

A little bit of research has shed very little light on the Killer Dolls, other than they're Argentinian, and this would appear to be their only album. It's not easily available either, so I'm surprised a copy turned up in a branch of Oxfam in Cambridge (left behind by a South American student perhaps?).

, a collection that features a few bands I know (eg The Super Bees) and plenty that I don't but that have names which, if sometimes a little predictable, suggest they could be worth a listen (eg Streetwalkin' Cheetas, The Riffs, and the East Side Suicides). So £1.99 spent on a CD by a band I've never heard of points me in the direction of 30 others.

That, like the hokey cokey, is what it's all about.

http://www.comicvsaudience.net/images/flow_heavymetal.jpg
Posted by DGW at 13:46 No comments: 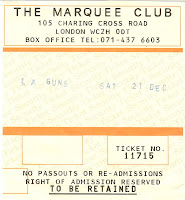 This gig took place only a few months after Motley Crue played the same venue (billed as 'The Four Skins' which led to fans of the Oi! band of the same name to threaten to show up and literally flex their collective muscles).

Tickets for the Crue show sold out immediately - but they were in a different league to LA Guns, a fact that two poor girls perhaps didn't understand for when I wandered up to the box office about 15 minutes before it opened I found myself sixth in the queue - the two girls at the front had camped overnight expecting demand to be rather higher ....

Looking back this was definitely one of the best gigs I went to in that era - as a homecoming for Phil Lewis (both Girl and particularly Torme were Marquee regulars) it was always going to be a little bit special.

I saw them once more in 2001 (as referenced here), this time at the Camden Underworld. We drunkenly found ourselves down the front, high-fiving with the band and generally acting like teenagers. As cynical as I am about the albums that followed their excellent debut album I always seem strangely drawn to this band.

OK, so it's another book. And it may or may not contain any glam references (so far I've only seen what's on Venn That Tune).

But a book that combines music & maths immediately gets bonus points for trying. Check out the examples); am particulary impressed with the MC Hammer one ....

"Grit, Noise, and Revolution" and "Grapes from Thornbushes"

A couple of books have come to light in the last day or so that look worth a read.

Found this one when googling on Ron Asheton and the Stooges yesterday. The title pretty much says it all - sample pages can be viewed on Google Books.

Alissa Ordabai's fictional tale of the back-stabbing London underground rock scene. Having been there and done that the first chapter teaser I've just read on MySpace is eerily familiar ....

As is now being widely reported, Stooges guitarist Ron Asheton has been found dead at his home in Michigan. Perhaps most sadly it's been suggested that he may have been dead for several days before his body was found.

I'm sure I'm not alone in offering condolences to his family and friends.
Posted by DGW at 08:28 2 comments: