Following on from Guns n' Roses having to cut their sets short at Reading & Leeds (after taking the stage late on both nights), news now emerges that Axl Rose sacked his tour crew after he overslept before the Reading show and then had to re-hire them for Leeds!

Hats off (in my case this would have been a black velvet peaked cap) to Nirvana Ruined Everything, a blog that is eerily like this one but looks and reads better!

Check it out and, if you dare, submit your own pre-Kurt photos.
Posted by DGW at 15:14 No comments: 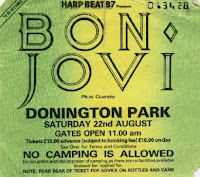 After seeing Iron Maiden in 1986 it was almost a full year before I managed to attend another 'proper' gig. At this stage I was still veering towards thrash (Appetite For Destruction had just been released but had yet to change my life) and so the mid-bill pairing of Metallica and Anthrax was my main motivation for going.

Arriving just in time for Cinderella (and as a sign of the times, free cigarettes - Marlboro were one of the sponsors - and also condoms were being given out on the site), we found ourselves immediately experiencing the joys of the festival setting with the onset of rain. I'm pretty sure I wouldn't be able to stomach it now - with the possible exception of 'Shake Me

' - but we were all big fans of Night Songs and so the rain did nothing to prevent our enjoyment of their brief set. Their presence was almost certainly determined by their relationship with headliners Bon Jovi (although there is nothing to suggest that they were tied by the same terms as Skid Row famously were), and set the Philadelphia-based quartet up for a successful few years.

Second band of the day was WASP - complete with semi-naked-woman-on-rack routine, which was all well and good but did seem to jar a little with the setting, crappy weather and time of day. Not one of my favourite bands, though the likes of 'Wild Child' and 'I Wanna Be Somebody' still stand up.

And so to the real business of the day. Anthrax were riding high with Among The Living

(b-side to 'I Am The Law' and later single in its own right, I'm The Man

, was also doing the rounds) and I was happily down for the front for their set, newly purchased Anthrax baseball cap firmly on my head. Faster - and a bit sillier - than Hetfield and co, they were probably my pick of the day.

Metallica were a year on from Master Of Puppets and the death of Cliff Burton. His spectre has loomed over the band ever since, to the point that even after almost two decades in the band Jason Newstead struggled to feel accepted (the dysfunctional state of the band is best observed in Metallica - Some Kind Of Monster)

. As much as I enjoyed their set they didn't match up to Anthrax on the day.

Not wishing to speak ill of the dead but I have zero recollection of Dio as I paid them no attention! And as for Bon Jovi, well, my main memory - and a happy one at that - was the appearance of Bruce Dickinson and Paul Stanley during the encore (not least as the denim jacket I was stylishly wearing on the day has a KISS 'Destroyer' backpatch - a slightly odd choice given that I didn't own the album in question, or indeed any KISS albums).

The day almost ended disastrously after one of our group managed to lead us to completely the wrong car park. It had been made clear that the coach would wait for one hour after Bon Jovi finished and no more. It was only when one of the stewards asked a very simple question that we realised our mistake:

'Do you remember if there was grass or gravel when you got off the coach?'
'Grass.' (said while standing on gravel).
'Then you want the other car park.'
'Okay. Is is far?'
'Yes - about a mile that way.'

We were already late, but thankfully the coach had been unable to leave as it was boxed in. We didn't make the same mistake the following year ...
Posted by DGW at 09:00 No comments:

Crazyhead - Have Love Will Travel

Dogs D'Amour - How Do You Fall In Love Again?

The second Hollywood Brats album has taken on almost mythical status. Back in my record shop days there was no reference to it in any catalogues (but at one point an album called 'Whatever Happened To The Hollywood Brats' did appear on a small label's release schedule but never materialised - at the time I put it down as a re-issued & re-titled edition of their debut).

So did it ever exist?

Even in the internet age there is seemingly no information out there, and that includes the band's own website and MySpace page. Amazon listed a Casino Steel best-of which supplied some hope, including as it did two Hollywood Brats songs ('Little Ole Wine Drinker Me' and 'Suckin' On Suzie') that weren't on the debut. But even that's long-deleted.

I sent a message to their MySpace account in September 2006 and got this reply:

"Only few fans know of the lost album, the second album to be exact. You just ought to look for it!"

Nice to have confirmation, but still no closer to hearing it!

And that's how things remained until I found this. Not surprisingly it doesn't compare favourably to the debut.

Also here's a clip of the band during a brief reformation in 1980.