A heads-up to regular Glamrock Aftershock commentator Michael, who is currently writing for The Big Takeover. As well as a wide selection of reviews Michael's also posting a weekly top 10 - amongst others, the Last of The Teenage Idols and Uncle Sam get what must be their highest chart placings ever (with the possible exclusion of Ray Zell's year-end charts in Kerrang!).

Michael's articles can be found here - take a look, and maybe grab a listen to some of the artists. There's a few that are already leaping out at me ....
Posted by DGW at 13:05 No comments:

The Last Of The Teenage Idols - Satellite Head Gone Soft

Aaaw, the Teenage Idols. So many happy memories of nights at the Marquee and the Astoria (once on the same bill as the Soho Roses - the evening only tainted by headliners Tigertailz).

'Satellite Head Gone Soft' (supposedly an anagram of the band's name - I've never checked) is another long-deleted album, as is Buttz's previous release with the Babysitters, meaning that the world is missing out on the classic that is 'Gina' (itself a former Babysitters live favourite).

Some digging around took me to this interview with Buttz by occasional Glitzinet scrawler Andy The Guttercat (though I don't think I've seen him on there in a while) in which Buttz rather harshly dismisses the album (and to be fair he's right in a way - it's definitely of its time and could have done without some of the ropey keyboard sounds and squealy guitar playing) and as ever there's the obligatory Sleazegrinder feature.

Email ThisBlogThis!Share to TwitterShare to FacebookShare to Pinterest
Labels: Babysitters, Buttz, Last of the Teenage Idols

and The Nottingham Tapes

the announcement of their return in 2002 was one that I welcomed. Sure, I'd seen Michael Monroe on a solo tour, Cheap & Nasty a handful of times and the Blonde & Blue show in 1993 that saw Monroe, Sam Yaffa and Nasty Suicide take the same stage (and given the current line-up of Hanoi Rocks this remains, numerically, the closest I've seen to a full reunion - for a detailed list of Hanoi-related projects see http://pilleri.spt.fi/~jukka/hanoi3/common/downloads//line_ups_list.txt). 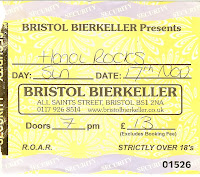 The first date I caught was at the Bristol Bierkeller, a former stamping ground of mine that I hadn't been to in at least a decade. In the late 80s and early 90s this was a staple venue on the rock circuit but in an inauspicious start to the evening we saw Michael Monroe on his mobile phone, next to the multi-storey car park opposite the venue. Once upon a time the man would have mobbed but not tonight. Then inside Andy McCoy walked through the very limited audience - or rather hobbled through with a walking stick (presumably the result of his infamous fall from a window in the 90s).

First up though - and a real bonus - was the support band, the Diamond Dogs - a great rock & roll band in the mould of the Faces, who at the time featured Darrel Bath. Having been in awe of Jo Dog I'd perhaps never given Bath any real credit as a guitarist (and that includes his work with the CryBabys), but that all changed that night. My best intentions of picking up their back catalogue never made it beyond Black River Road

, something I need to rectify.

Hanoi's perfomance was pretty muted - McCoy was rooted to the spot and there was no encore - but I left the venue reasonably satisfied, albeit without feeling any real need to see them again the following night at Camden Palace.

The difference between the two shows was stunning.

It would be easy to suggest that they'd been able to acquire certain substances in London that had evaded them in Bristol. More likely it was simply the greater buzz that filled the packed-out venue. Either way Andy McCoy played like a man possessed, filling every inch of the stage. Eveything was delivered with far more conviction and passion than the Bristol show. In an odd post-gig twist, a friend approached McCoy by the stage door and got an autograph; they started to chat until Mrs McCoy led him away towards some Japanese girls, 'your real fans' as she put it ....