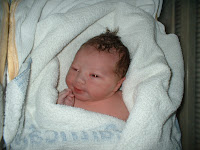 Due to the arrival of one Martha May a few days ago it's fair to say that my time spent online will be somewhat restricted in the short-term!

Still, check back when you can, and there's always The Big Takeover, Green Man Music and the various other sites listed on the left to keep you going in the meantime ....
Posted by DGW at 21:38 4 comments:

The forthcoming New York Dolls album, Cause I Sez So

, can now be pre-ordered over on Amazon.

The title track is also being streamed on the band's My Space page. And pretty good it is too!

Well, it is my blog after all ... and if anyone else wants me to shamelessly mention their band (past or present) do let me know and we'll see if we can come to some kind of arrangement.

Still, seeing as today is the 20th anniversary of the first gig (20 years!!!) there is at least some point to this posting. So please allow me to set the scene.

It's a gig that shouldn't really have happened, for as of mid-March 1989 we

a) didn't have a drummer and
b) only had two songs.

Our hand was forced after attending a Swindon Rock Front meeting - now, don't get carried away thinking this was some alternative underground movement. Swindon Rock Front was a council-led initiative that put on gigs at the Link Centre as well as a series of outdoor shows through the summer at the Town Gardens park. Compared to the other four attendees we were the youngest by some distance. We only went along hoping to find a drummer, left our details and a few days later got a call from a band that had a gig coming up and, seeing our name and twigging what sort of band we probably were, offered us the support.

Despite the two minor drawbacks above we accepted. And I would recommend any band that needs a kick up the backside to do the same - nothing focuses the mind more than knowing you've got a gig in three weeks' time.

So stage 1 - find a drummer. Easy. Off we went to local punk heroes Cut Throat Razor. Top blokes one and all, and drummer Freddie stepped into the void on loan.

Stage 2 - write some songs. Not so easy. The only two we had were 'Teenage Dream' (predictable 12-bar with lyrics stolen from the first D'Molls album) and 'The Elvis Rug', a 40 second paean to, well, a rather grotesque Elvis Presley rug that had been hanging unsold for years at Swindon's Brunel Market until one day - it was gone. There were a couple of covers we'd been playing while drummerless ('Blitzkrieg Bop' and 'Anarchy In The UK' - we were nothing if not predictable) and so that was half the set sorted.

The rest was cobbled together over three rehearsals. In some cases they were barely songs but a collection of randomly assembled riffs that the singer, Mark, tried to make sense of lyrically, desperately searching for the bit that could best be considered 'the chorus'. Funnily enough the song most considered our 'hit', 'Chained To Your Love', for which I have to take sole responsibility for its terrible lyrics regarding a visit to a prostitute but which actually featured something resembling a proper song structure, was - rightly - dismissed as excruciating when we reformed for a couple of gigs in the mid-90s. Bassist Billy weighed in with one of his, and somehow we found ourselves with the required 30 minutes worth of material.

Fast-forward to the gig itself ... due to an accidental double-printing of tickets the 200 capacity venue had about 300 people in it (we'd sold over 100 on our own). No pressure there then. We went on stage at about 8.20pm, opened with a brief snippet of the 'Batman' theme, and then into 'Blitzkrieg Bop' (also played by LA Roses later on). The first Rockit Dolls original was 'Fatherly Type', a song all about never wanting to have kids. As I type this I'm awaiting the arrival of my second child, and there are three other baby Dolls fathered by my fellow band members - so we might have gone back on that one.

Mark suffered a microphone problem during 'Chained To Your Love' (not that anyone missed much as the second verse was merely the first one repeated), I cocked up the solo to 'Teenage Dream' but other than that we pulled it off - having not bothered leaving the stage we assumed an encore (a repeat play of 'Anarchy In The UK' - the second of three airings as the other support, The Fred Dineage Experience, also played it - I did say these weren't original covers). A live video exists of this, and when Mark says 'Shall we do 'Anarchy' again?' a voice close to the camera is heard to say 'Why not - Dreamtime did it'. We have no idea what this means.

After the gig I signed two autographs. I have never been asked to do so since and so it could be inferred that this was the peak of my musical career.

But hey, there's still time to change that - isn't there?

http://www.myspace.com/rockitdolls
Posted by DGW at 08:20 No comments:

Some of my three year old's books come with CDs with a read-a-long version of the story in question. I was just backing some of these up (as they tend to get thrown around quite a bit) and much to my amusement the CDDB music match program identified Green Light for the Little Red Train

Anything you want to tell us Axl?

Nick Cave and the Bad Seeds

had been released and I couldn't stand it. My colleagues at Our Price however were big fans of Mr Cave and it seemed to be on constantly in the shop (looking back it probably got played twice at the most).

That same year I had what I then considered the misfortune to see him at Reading Festival. We only went along to see Jane's Addiction; one of our party lost his ticket inbetween the first gate and the main entrance, went back and bought another and only then found out that Perry and the boys had cancelled (their replacement on the bill? Gary Clail and the On-U Sound System. I mean, I ask you ...).

The initial turning point was Murder Ballads, but it was on seeing

that the full volte face was performed. I even went to see him live (but then again it only meant going as far as Alexandra Palace, approximately 20 minutes walk fromw here I lived at the time).

This morning the excellent Cannibal's Hymn

popped up on my MP3 player just as I was arriving at work (after a journey made to the backing track of Art Bergmann - more on him another time) and the urge to confess was too great to ignore.